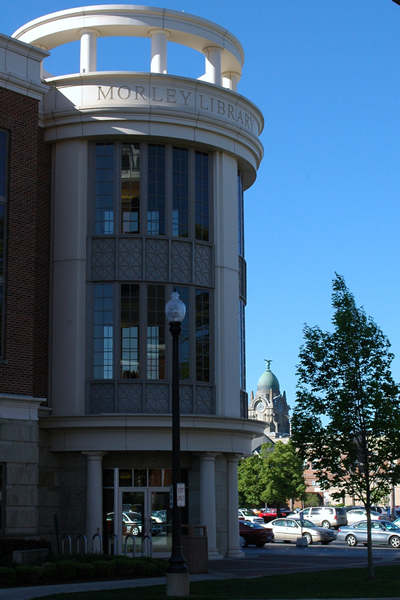 On 24 January 1968, Mildred Steed and eight other Lake County women, all with strong interests in genealogy, met in the Steed’s Leroy Township home to found the Lake County Genealogical Society (LCGS). The society’s purpose was “fostering an interest in all people who contributed in any way [to] establishing Lake County and the surrounding areas.”

For about ten years, the members met at the James A. Garfield Home in Mentor, now a national historic site. When the extensive renovation process of the president’s home began, the group met at various sites around the county before settling permanently at Painesville’s Morley Library.

The society became a chartered chapter of OGS on 4 May 1974 with seventy-six members. It has always been an active and productive society, which was recognized by OGS in 2006 with the OGS Chapter of the Year Award.

In July 1974, the first issue of the aptly named Newsletter was published. In January 1989, the newsletter proclaimed, “A New Year! A New Look! A New Name!” by way of introducing Lake Lines. In April 1997, a distinctive lighthouse logo was added, with name and logo evoking the society’s unique image as a county whose area includes more square miles of water than of land. The society changed its masthead in 2015, using an updated Lighthouse graphic, keeping the LakeLines name, but altering the configuration to LAKElines and rendering the whole in blue.

The LCGS lineage society, First Families of Lake County, was founded in March 1998, with the first inducted member making application to the lineage society in August that same year. Membership is currently available to anyone who can prove direct ancestor residency previous to 1841 in the geographical area which is now Lake County. The society inducted its seventeenth member into this group in January 2009.

In November 2008, LCGS was featured on a television program, Video Journal, a monthly television magazine, aired by Mentor’s local Channel 12. It presented a short piece on the society, with two members featured in the clip, talking about the benefits and pleasures of genealogical research.

LCGS has had a significant online presence, originally hosted by Morley Library. Projects such as Lake County Marriage Record Index, Birth and Death Record Transcriptions, and Geauga County Deeds (geographically Lake County after 1840) were submitted to Lake County OHGenWeb. For the Naturalization Index (1860-1975) in 2002, it was decided to have a special projects site for the society hosted by Rootsweb. In 2003 the Lake County Cemetery Inscriptions Project, among the best of its kind on the web according to some who have used it, was added. About 2012 the home page was combined with the projects page. Our Facebook page debuted in 2013.

The society has created six publications for sale, many of which have been purchased by individuals and libraries throughout the country with occasional requests from bookstores overseas. The latest to join the list is the culmination of a six year project which resulted in the publication, in 2014, of History Hall of Lake County, Ohio Fairgrounds, A Biographical Anthology.

Among its activities, the society has sponsored occasional bus trips to the Allen County Public Library in Fort Wayne, Indiana, the research facilities in Washington D.C. and the Archives and State Library in Harrisburg, Pennsylvania. Several ongoing popular society events include a January potluck luncheon meeting, and a July evening picnic. The society has also sponsored a few fall library lock-in research evenings and some beginners’ research workshops. It is currently providing genealogical outreach programs for libraries in the county.

Current membership in LCGS is approximately one hundred. Its members continue to be involved in gathering and making available information of local genealogical and historical value, as well as maintaining an interest in the goals and activities of its parent organization.