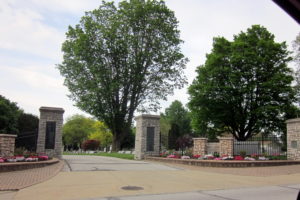 The main cemetery in Willoughby is located on Sharpe Avenue. The caretaker office and garage in the north west part of the cemetery is on Madison Avenue.

In early 1800 this section of the country was surveyed by a group of men from Connecticut. Some of them decided to make this area their home and it was named Charlton. Prior to organization as a township, it was renamed Chagrin. A town was formed and men brought their families to the new Chagrin, but there were many hardships and people died. In those early pioneer days they were buried on their farms.

It was decided that a cemetery was needed, and on Belden Hill (see Willoughby Pioneer Cemetery) one was formed. Little is known of this cemetery, but stones were remembered by older citizens as late as the early 1900s.

The original Chagrin Township minutes at the Western Reserve Historical Society have the purchasers lists for this “Chagrin Burying Ground” as well as a map of the first sections on page 34. On page 54 there is an addendum to the map, quite large, which is very similar to the current map of the Willoughby Cemetery.

Note: Duplicate stone numbers indicate multiple persons inscribed on the same stone as detailed in the inscription column.
This cemetery utilizes multiple tables due to its size.
Willoughby Village Cemetery Table 1 of 2